As a child August meant school was around the corner.  With mixed feelings she anticipated a new school year, that smell of fresh ink on new books, her best handwriting on that first page of her scribbler and so much promise to fill her mind…learning anew. Of course there were new students arriving in her little town and new relationships forming opening her heart she smiles, waiting with anticipation.   And yet, as months progress death looms in the air as leaves fall and grounds reek of decay…

The Troiku is a new haiku form created by Chèvrefeuille

echoing
mistakes repeated
over and over

Her grandchild is tucked in, after an evening laughing playing cards and watching Netflix; he’s resting up for a tournament tomorrow morning. How silent the place feels all of a sudden. She had not realized just how quiet her home was…lacking life without her children.  One gets used to the quiet not realizing what one is missing sometimes.

[…] “Last evening I was looking out from my balcony and saw a sparrow perch on a branch. All of a sudden, with a quick jerk, she ruffles her feathers and spreads out her wings – her bodyline on an upward curve, about to take off.” […] Kala Ramesh

end of a long quest
scent of Givenchy
still lingers

heaven opens up
scent of Givenchy
an angel awaits

Sometimes it is best not to know what some people think about you especially if it will only break your heart. It is so much easier seeing the world through rose-tinted glasses even if there is suffering in the world, why not let the good outweigh the bad?

Happy-go-lucky
ignorant of any misgivings
joyous to a fault

Getting on to the bus, she shuffled with her cane and asked the young man behind the bus driver for his seat. It is a seat designated for visually impaired or those with limited movement. She would have taken a seat further but her backpack was heavy and there is a shelf to place bags next to that seat. The young man had his ear buds on, on and looked at her and barked, “there are plenty of other seats!” with a smug look on his face. She noticed a seat further down so she took her bag off her shoulders and placed it next to the man and shuffled off to another seat. An older woman looked at her with a look of fear in her eyes. Now that really irked her for she felt that some older and more frail men and women felt intimidated by this behaviour.

She sat down and took out her beaded bracelet and decided to chant her mantra silently. All the while trying to “let it go”. It was not easy at first for responses like “What would your mother think about your behaviour? Would you treat your grandmother like that?” But then she was thinking he came from a bad place emotionally and was perhaps hurting…maybe angry at the world.  After completing her mantra she could gradually feel a sense of relief, she then chanted in her mind a mantra wishing happiness to the world, thinking of this angry, rude young man.

When she stepped off the bus the young man was behind her and had to pause so she could hold on to the side of the bus to avoid stumbling (like she did last year and fell flat on her face). She noticed he had very fashionable and expensive clothes on and shook her head in dismay at his lack of education and consideration for others.
Getting on the Métro, she was saddened looking at the inside of the train…

“May all beings everywhere be happy and free and may the thoughts, words and actions of my own life contribute in some way to that happiness and to that freedom for all.” Shanti: Peace

change is constant
something you can count on
dependable and sure.

seedlings sprout
change into budding flowers
one of nature’s grace

In honour of the late David Bowie…

In her youth she had  many plants in her home.  Begonias, African violets, dieffenbachias, spider plants, cactus and ivies. Oh! how she loved them!  Those years trying to have children, she treated each one like her baby.  Each plant had different needs… watered once a week, some twice, some once a month. All had their special personality, some shied from the sun, others rose with the sun and her prayer plant that folded at night reminding her always to say her prayers before going to sleep.  Now she had her mother and this plant to remind her.

One year she adopted  a beautiful fern that she kept in her bedroom where it was cooler and visitors might not rub on it.   And then, she had babies which took up all her attention. Most of her plants left for foster homes.

Her family moved to a home in the country, where there was room to run and play and plant a huge vegetable garden.  She planted marigolds around the vegetables to protect them from unwanted visitors and petunias and begonias in the front flower bed.

That was long ago. She’s  moved since then; the children grew up and left. She and her cat look out at her humble herb garden and a mother-in-law tongue sits in the dining room. Now the plant serves her, wagging its tongue and purifies the air.

flowers blossom,
spread their leaves – then,
the sun sets 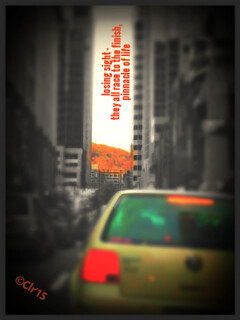 losing sight
they all race to the finish,
pinnacle of life

I was so fascinated by Chiyo-Ni’s haiku,  that I had check to see if I could find an ebook this morning and found a lovely collection of 44 selected Haiku composed during the entire life of Chiyo-ni. The Snow Woman :Selected Haiku by Fukuda Chiyo-Ni. Haiku selected and translated by Luca Cenisi, President of the Italian Haiku Association (AIH)

There are so many great haiku, it was not easy choosing…I think I may start a little booklet working on some of her haiku and trying to write in that tone this fall.

on her day off
a prostitute wakes up, alone:
the cold of nights
© Chiyo-Ni

Here is one more:

I saw the moon:
now I can say goodbye
to this world
© Chiyo-ni

sunset divine
calling me softly
to the other side

Life as it should be
slow, painful, mystifying
and then there’s joy

and then there’s joy
life accelerates
in the end, there’s light